Pressures from a toddler

Zac was starting to understand where babies come from. Not in the biblical, physical sense, thank goodness, but that other families had babies in their houses and that, in simplistic terms, they originally came from Mummies’ tummies. Fortunately, having had a caesarean ‘sunroof’ job with Zac, I was able to show him my scar on my tummy and explain that’s where he popped out, so avoided any awkward questions about where babies actually came from and how they were made!

His questions were however getting more and more frequent and in depth. His nursery key workers often told us how gentle and caring he was with the younger children, and how he loved to help the grown ups by fetching toys or dummies for all the babies. He was becoming more aware of babies all around him and as more new babies appeared in the baby room, with some being the younger brothers or sisters of his friends, his questions become more direct.

With the innocence of a three year old, they were obvious questions, but when they came out of the blue or were randomly dropped into a conversation we were having about which dessert to have, they’d often knocked Jason and I off our feet

“When are we getting a baby?” “Why is our baby not here yet?” “Where will our baby come from?”

Zac would sometimes talk about Millie, the little sister of his best friend Harry and just as he would ask for a football kit or a Fireman Sam figure like Harry, he was obviously wondering whether he was going to get a baby sister like Harry too. He’d often fuss Millie whenever we’d see her. He would always rub her cheek or go to give her a hug. He’d rush to help if he saw she had dropped something and would always talk about the times he’d seen her in the baby room during the day.   It was often difficult to explain why Harry had a sister and he didn’t but it was an easier conversation to have when I could distract him with questions back at him about what he had seen her doing that day. He always had a tale to tell and forget his original enquiry. It was only afterwards, when I had time to reflect alone and could let my guard down, that his questions really hit home and I’d allow myself to feel upset.

As we grew closer to starting the IVF treatment it seemed his questions became more direct, and sometimes I even felt, somewhat prophetic. He’d always talk about ‘the baby’, and annoyingly, I’d allowed myself to feel comfortable with the expression as if it brought some reality to the situation. He used the term and he led the questions, but often I used to have to give my head a shake as it was almost as if I found comfort in the conversation. I was perhaps allowing myself to believe it was all real. He’d ask inquisitive questions like “Was the baby in your tummy when I was in there too Mummy?” or more practical queries that were obviously concerning him such as “Can the baby sleep in my room when it comes?”

Despite feeling some warm hope with our little chats, I was always 100% careful in what I said to him and to manage his expectations. I used to listen to him talking and be saying to myself “you need to be careful Helen for his sake, you’re desperate, not stupid.” He was obviously far too young to understand the complete picture and any false hope given to such a young boy could be shattering later.

We did however say our prayers together and sometimes pray for a new baby. Brought up a Catholic, I always felt my faith had done well to keep me on the straight and narrow. Going to church every Sunday had given me an acute sense that there was someone listening to your prayers and that you should always be sincerely thankful for any blessing you received. Though not devout nor strict, my faith was still important and there were elements such as prayer and thanksgiving that I wanted to bestow on Zac to help guide him.

“Please God, could we please have a new baby. We promise to love it and care for it. Thank you for our loving family and thank you for listening to our prayers.”……….And then a little voice would say “and can we have two babies, a boy and a girl and can the baby boy be good at football?” His prayers were lovely to hear, funny yet serious!

My Grandma and Mum were both loyal to their Catholic faith. Amazingly, after having one and a half ovaries removed when she was just 19, my mum managed to conceive both my brother and I with just half an ovary, with no medical assistance. Every time I stopped to think about that amazing fact, especially in the situation I was in with my want for children, I couldn’t help but wonder how truly miraculous it is that Andrew and I are here at all.

The month before I conceived Zac, my Mum gave me a prayer card and medal dedicated to St Gerard, the patron saint of motherhood. Her mother, my Grandma had given it her when she was trying for me. I immediately treasured it. It meant a lot that Mum had had it close to her when trying for me, but it was extra special knowing that the original intention had been made by my beloved Grandma.

I put the card and medal under my pillow and said the prayer on the card every night, without fail, before I went to sleep. To realise the timing, in that I fell pregnant soon after it was given to me was made extra special, not just because I’d was finally pregnant but to think that there was some link to both my Mum and Grandma and that we shared something special. St Gerard became one of my most cherished possessions.

Sometime later, Jo was trying for a child and I gave her St Gerard and asked them both to look after each other (in fact I told her in no uncertain terms not to bloody lose him!) When she told me she was pregnant, my love for and belief in my St Gerard medal grew stronger.

He remained by the side of my bed and a few times, Zac had seen him and asked what it was and who the man was in the picture. On one occasion I explained that he looked after all Mummies in the world and sometimes, if they are good, he gives them babies. I never thought any more about it. Months later, out of the blue Zac said something and I couldn’t make out what he was trying to say. “SaynDewar!”? He was now getting to the age where he’d get frustrated if we didn’t understand him and would sometimes give up trying to say the words but give us clues instead. “You know, that man in your room who is going to give us a baby!” Ah SaynDewar was Saint Gerard!

Another time Zac had been snuggling in our bed before going to his own bed and was dragging out the time, trying every stalling tactic in the book to avoid leaving. “Kiss for Mummy, kiss for Daddy…and kiss for SaynDewar” He leant over, grabbed my St Gerard medal and kissed it, as he’d probably seen me do many times. That night, Zac slept in our bed all night. He’d pulled a blinder! He knew all my buttons to press!

Zac’s quizzes about babies were obviously occasionally tricky for me to deal with, but more often than not they were refreshing and his innocence and directness would remind me what a blessing this little boy really was for Jason and I and how lucky we were to have such a fabulous child already.

On one occasion when he was asking about how you got a baby, I had answered that I had to be a really, really good girl and if I could keep it up, then I might be lucky enough to get a baby in my tummy. I was sat on the floor in front of my tall mirror doing my make up and Zac, as usual was sat in the middle of my crossed legs. After a few moments he leapt up and said, “I know Mummy! If you don’t shout at me, you’ll be a good girl, then you’ll get a baby!” At three years old, he was wise beyond his years and as well as howl laughing at his delight at possibly working the situation to his advantage, I also felt a pang of regret that my boy was obviously trying desperately to think of ways to make it alright. If it was at all ever possible, I loved him a little more at that moment, for making me laugh so hysterically and for caring enough to come up with a plan.

Zac’s growing inquisitiveness, his youthful honesty, his absolute innocence and his own obvious desire to have a new baby in the family were all beautiful, lovely qualities for us to witness develop. Yet at the same time in their own way, they were so painful at times to have to deal with. They were constant reminders. They put a sort of realism on my desire in how a new baby could positively impact his life. More than any of that, to know that he too wanted a baby brother or sister, to either have someone to play with or to just have something that his friends already had, and for me to know that I couldn’t give that to him, tore at my heart. The reminders hurt but so did the knowledge that in some small way he was hurting too.

I often just wanted to pull him close and whisper: “I know son, I know.”

GIFTS to comfort those who are struggling with fertility.

GIFTS to motivate or comfort yourself if you are feeling low.

A gorgeous collection of gifts specially selected because we understand that sometimes there are just no words. 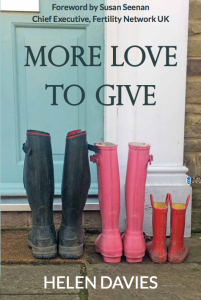 MORE LOVE TO GIVE is my memoir of our struggle to conceive a second child. Honest, frank and occasionally funny, I tell it how it was, how we coped or didn’t cope, give an insight into the challenges we faced through 4 rounds of IVF in our desperate bid to provide a sibling for our son.

VISIT THE SHOP TO BUY YOUR COPY TODAY

SHOP!!!  Our collection also features inspiring gifts that will comfort yourself if you are going through heartache or treatment.  To lift, to motivate, to encourage or to make you laugh, we have tried to think of all sorts of scenarios and find a gift to suit.   CLICK HERE

MORE LOVE TO GIVE is my memoir of our struggle to conceive a second child. Honest, frank and occasionally funny, I tell it how it was, how we coped or didn’t cope, give an insight into the challenges we faced through 4 rounds of IVF in our desperate bid to provide a sibling for our son.

VISIT THE SHOP TO BUY NOW!

LET’S ALL TALK ABOUT IT!

There are many ways we can work together to help support couples and raise the profile of Secondary Infertility. Speaker opportunities, feature writing, case studies, advertising on this site, Vlogs and Blogs link and collaborations - if you have an idea Click Here